Omnitrope® is a brand of growth hormone made by Sandoz Biopharmaceuticals. It is used to replace the growth hormone that is missing in a person’s body.

Omnitrope® is given as an injection. Omnitrope® requires a valid prescription from your prescriber. Ocean Breeze Healthcare can provide Omnitrope® as well as most of the supplies you would need to administer Omnitrope®.

What form is Omnitrope® currently available?

Omnitrope® is currently available as a vial or cartridge.

Omnitrope® vials contain 5.8 mg of active drug. The vial needs to be reconstituted, or mixed with diluent (the clear liquid solution) provided in the same box as the drug vial prior to administration.

Omnitrope® Pen is a pen device available to be used with 5 mg and 10mg cartridges.

What are some potential side effects of Omnitrope®?

Omnitrope® is generally well tolerated. While unlikely, potential side effects include rash, redness or bruising at the site of injection, headaches, high triglycerides and hematoma. Some adults may experience symptoms of swelling, joint pains, or high blood sugar. If you are experiencing any unwanted side effect(s), contact your doctor or pharmacist. You may also report the side effect(s) to the FDA at www.fda.gov/medwatch, or call 1-800-FDA-1088.

How do you administer Omnitrope®?

Omnitrope® needs to be injected subcutaneously in order for the medication to work.

For Vials:
Omnitrope® can be injected with a prepackaged syringe with needle. Your doctor will tell you the exact type of needles and syringes to use to inject your Omnitrope®. For details, refer to the Omnitrope® vial user manual (PDF: Omnitrope 5-8 Vial Instructions English).

How do you store Omnitrope®?

Omnitrope® must be stored in the refrigerator (36 – 46° Fahrenheit) at all times.

How long does Omnitrope® last?

Before opening, any unused Omnitrope® product is stable until the indicated expiration date listed on the packaging, while stored in the refrigerator.

For Vials:
Each vial of Omnitrope® may last for several injections depending on the prescribed dose. Once the vial has been opened, and the dry powder is mixed with the diluent, the mixed solution is stable for up to 21 days.

For Cartridge:
Each cartridge of Omnitrope® may last for several injections depending on the prescribed dose. Once opened, the cartridge is only stable for up to28 days. Any cartridges, while in the pen device, must be stored in the refrigerator (36 – 46° Fahrenheit).

How do you mix Omnitrope®?

Omnitrope® vials need to be mixed with the provided diluent before injection. For instructions on how to mix Omnitrope® vials, please refer to the Omnitrope vial user manual (PDF: Omnitrope 5 8 Vial Instructions -English). Omnitrope® cartridges are available as a ready to use liquid solution and do not require mixing.

Are there any preservatives in Omnitrope®?

How often do I take Omnitrope®?

You should take the Omnitrope exactly as prescribed by your doctor. In general, Omnitrope® is given as a once-a-day injection. 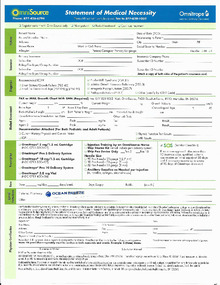 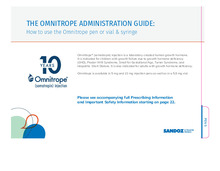 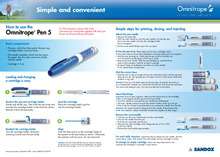 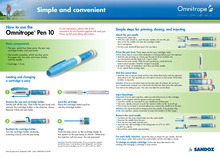 
Information on this site is provided for informational purposes and is not meant to substitute the advice provided by your own physician or other medical professional. You should not use the information contained herein for diagnosing or treating a health problem or disease, or prescribing any medication. You should read carefully all product packaging. If you have or suspect that you have a medical problem, promptly contact your health care provider. Pursuant to 21 U.S.C. § 333 (e) (1), which limits usage only to the treatment of disease or other recognized medical conditions authorized by the Secretary of Health and Human Services, Ocean Breeze Healthcare does not dispense human growth hormone for anti-aging, cosmetic or performance enhancement purposes.

Our mission is to be the preferred and premier pharmacy resource for Payors, Patients, Pharmaceutical Manufacturers and Medical Providers as a result of our commitment to patient care, customer service, and innovation.

Ocean Breeze Healthcare aims to empower its patients, enrich its partners, and to evolve healthcare.